Are you interested in working on a new project exploring Halton’s industrial heritage, working with artist Laurence Payot and young people? The Bleach Packers will be a series of workshops across October/November 2021. The final work will consist of large scale public projections in Halton, reinventing the stories of the Halton Bleach Packers and other trades of the chemical industry.

We’re looking for the following practitioners to help shape the aesthetic of the work and deliver workshops with young people:

- A filmmaker to film the performance (performed to/for camera)

We’re ideally looking for people based in Halton but application from a slightly wider area will be considered. Please send a short bio and examples of your work/ website link to laurencepayot@yahoo.co.uk by 16th September.

Halton has a very interesting heritage rooted in the chemical industry, and still going today with companies such as Emerald Kalama, Vertellus, Industrial Chemical. Hutchinson’s first Factory was built in 1847 on land between the Sankey Canal and the railway and was making alkali by the Leblanc process. Other factories soon followed making chemicals and substances such as soap, borax, soda ash, salt cake and bleaching powder.

These ‘nastier’ trades have played, and are still playing, a key role in the local and wider economy and are sometimes overlooked or forgotten due to their less appealing exposure, often associated with pollution and damage to the environment. But how do local young people feel about those nastier trades? Do they believe that they still have a place in our society? If they hate them, could they actually live without them? How would they portray the workers from the trade, from the old bleach packers and todays’ factory workers? Would they be portrayed as ‘cleaning gurus’, producing substances that keep people safe from dirt and germs? Would they imagine them as destructor of the environment?

No matter the point of view, exploring the heritage of these nastier trades will offer a platform to be critical and to evaluate the past to imagine better ways to shape the future. It will offer an interesting and unusual entry point for young people to explore and celebrate Halton’s Heritage.

The working lives collection on Halton Heritage Partnership’s website presents some images of the bleach packers with their unusual, surreal, and strangely futuristic-looking outfits, and gathers stories depicting the harsh working conditions for these workers. These would produce inspiring starting point to create an ambitious project with young people, mixing dance, poetry, costume design, and sound into large scale projected videos.

Artist Laurence Payot will work with a team of young people to develop a series of videos projections revealing Halton’s industrial heritage with a contemporary and critical perspective. The videos will take life when projected on historical sites and/or large buildings/ structures during a series of evening events, or through a temporary / semi-permanent public installation. The project will be young people led, collaborative in nature, and yet of high aesthetic quality. 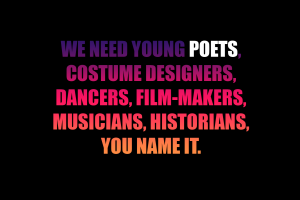 The Bleach Packers – call out for young people in Halton 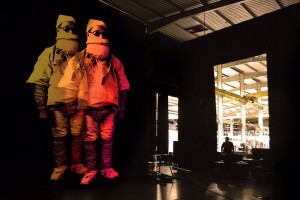